Online advertising is hitting a crisis point.  Many websites are discovering that nearly  half of their visitors are blocking ads, deeply cutting into the revenues they depend on for survival. As a web publisher, it’s time to start paying attention to why end users are flocking towards adblocking tools like AdBlockPlus.
People install adblocking tools out of frustration. Visitors come to your site to enjoy your content, not your ads. Ads that are heavily animated or play sounds get in their way, and are the number one reason people use AdBlockPlus. Even worse are ads that directly intrude on the content, such as interstitials, pre-rolls and popouts. If you show these kinds of ads, you will drive some of your visitors to install adblock. It’s hard to blame end users for installing adblockers, when it significantly improves their online experience. The question is, as a publisher, is there anything you can do to staunch the flow?
The leading adblocking plugin, AdBlockPlus, has proposed a bold solution: Acceptable Advertising. They are aiming to spare their users from the visual onslaught of hideous ads, while permitting websites to continue to monetize through advertising.
So what is acceptable advertising? It’s a set of simple rules about  non-intrusive display advertising. Compliance is judged by Eyeo, the company behind AdBlockPlus. If your ads are compliant, they will add you to a whitelist, which means that users of AdBlockPlus will see your ads by default. If you are a reasonably profitable company, Eyeo may seek a fee for whitelisting you. Here’s a quick rundown on what they look for:

1. No Animations or Sound 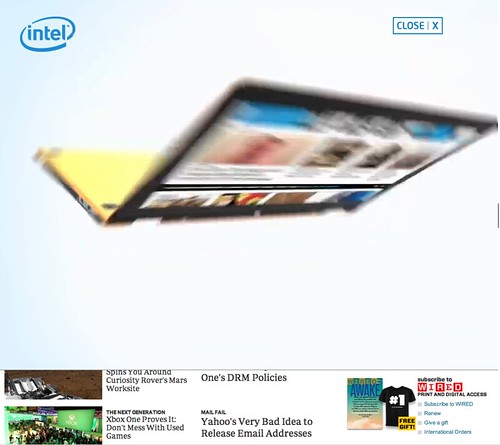 The most annoying ad is one that moves. Visitors follow a link to read a story, and instead of the content they came for, there are images whizzing around and inexplicable noises playing. By the time they’ve hit mute and found the  “close” button, they’ve probably forgotten why they came, and are more likely to leave than stay. As of this writing Wired.com’s front page primarily consists of an animated laptop, which covers almost the entire screen.
Not only is this distracting for the user, but it costs the publisher and the advertiser in hidden ways. These kinds of intrusive ads will drive part of your audience away, as measured in a recent report by Microsoft and Google.  Those who stay will be encouraged to install an ad blocking plugin, permanently opting out of all future advertising. 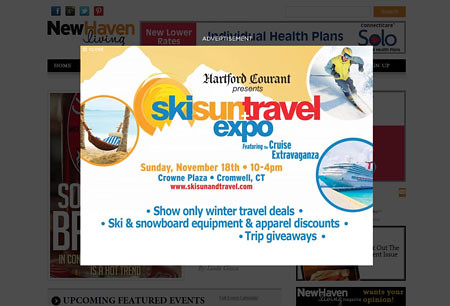 Links should take visitors to the expected destination. The Acceptable Advertising standard requires that no more than 2% of the words on a page can be paid links, and that any paid links should not be “formatted or behave differently than other links”.

Acceptable Ads: Where Are They Now?

AdBlockPlus launched the Acceptable Advertising standard in 2011. So far, it hasn’t taken the advertising world by storm. Perhaps publishers are loath to seek approval from the very company that makes the leading AdBlock plugin. Or perhaps the approval process is just too cumbersome. Only tens of publishers have been whitelisted, the most notable of which are Reddit and more recently, Google Adwords.
Perhaps the key problem with its adoption is what an economist would call the “Tragedy of the Commons“. It only takes a small number of unscrupulous publishers to run intrusive advertising that will drive people to adopt AdBlock. As a more respectful publisher, you end up as collateral damage. As a lone publisher, embracing acceptable advertising may not make a big impact on the number of adblock visitors you see in your PageFair analytics, and may actually reduce your CPM.
Here at PageFair we have a plan to change this situation. We’ll be launching new features shortly that will allow you to get the best of both worlds. Make sure to follow us on Twitter to hear more about the release.
What do you think about acceptable advertising? Would you be willing to view it in order to support your favorite sites? Add your comments below.