Almost no industry report or analysis in the ad tech industry is complete without a generous sprinkling of the term “walled gardens”. What is a walled garden in advertising? In a broader sense, any closed platform or closed ecosystem where the technology provider has significant control over the hardware, applications, or content can be called a walled garden.

In consumer technology, Apple’s decision to drop the ubiquitous 3.5mm headphone jack in favor of its proprietary lightning connector is perhaps the most recognizable example of a company making changes that lock users further within its… you guessed it—walled garden.

In ad tech, there are a handful of companies that claim a disproportionate amount of global ad spend and have more user data than anyone else. In this explainer, we’ll look at the origins of the term walled gardens, review the walled gardens of ad tech, and how they affect publishers.

Despite the incessant chatter about walled gardens in mainstream publications that cover ad tech these days, the term was first coined in a different context by John Malone, the founder of Telecommunications Inc., which was later acquired by AT&T.

US telecom companies serve as early examples of walled gardens. Mobile telecom operators have been known to exercise tight control over the services and applications that are available to users on the mobile devices connected via their network. In a more extreme example of walled gardens in telecom, in the 1970s, Bell owned all the hardware (including phones) and had indirect control over information sent through their infrastructure.

Around that time, a company called Hush-A-Phone had been marketing a small, cup-like device that mounted on the speaking party’s microphone and reduced the risk of the conversation being overheard. Bell sued Hush-A-Phone on the grounds that anything attached to the phone could damage their network. The court ultimately ruled in favour of Hush-A-Phone, and this landmark case is widely considered to be a watershed moment that led to the development of a secondary market for third-party accessories and the breakup of the Bell System.

Thankfully, things have changed a lot since those days—at least in telecom.

The walled gardens of ad tech 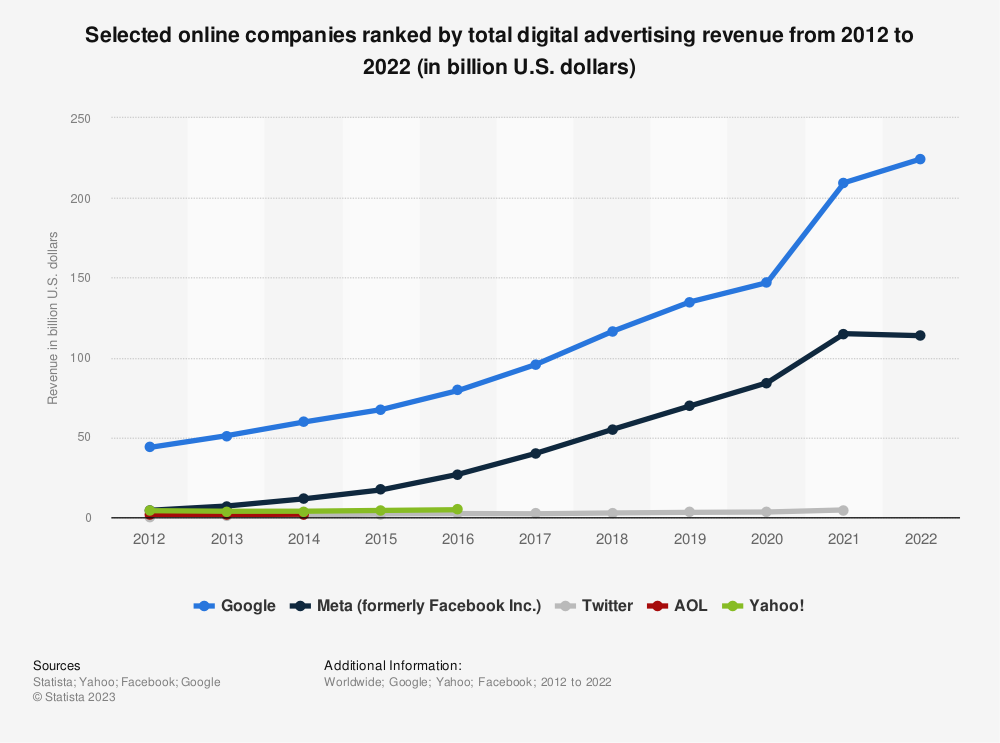 Here are a few ways in which Google and Facebook strengthen their position:

Now, another company is set to join the ranks of Google and Facebook, and turn the Duopoly to a Triopoly. According to an eMarketer report, Amazon’s share of the US digital ad market surpassed 10% for the first time in 2020, growing 52.5% YoY. Despite being a relatively late entrant to the digital advertising landscape, Amazon’s fast growth has already secured it the third spot as the largest ad tech platforms by revenue generated.

“For advertisers with goods to sell in the marketplace, Amazon ads were a key performance lever throughout 2020, especially with the cheap ad opportunities available in Q2, when many sellers suffered out-of-stocks and dropped out of the auctions,” said Nicole Perrin, eMarketer principal analyst at Insider Intelligence. “Amazon advertising has long been a must for marketplace participants, and that hasn’t really changed—though more brands and retailers are considering Amazon from an ecommerce perspective due to the pandemic.”

Google, Facebook, and Amazon may together take more than half of all revenue generated from digital advertising, but they’re not the only game in town. Companies outside the walled garden are known as independent ad tech companies, and include entities like:

How do walled gardens impact publishers?

Strong competition on the demand-side directly benefits publishers in terms of generating better yield for every available impression. In fact, this is the reason header bidding gained widespread adoption, which also serves as a good example for how walled gardens affect publishers.

Before header bidding, Google gave its ad exchange (AdX) a “last-look” advantage. With that, before an impression was served, AdX could review all competing bids and then had the opportunity to outbid them. However, the other exchanges did not get a chance to do so.

Header bidding leveled the playing field by allowing all exchanges to simultaneously bid on every single impression, resulting in better yield for publishers. Eventually, Google revoked the “last-look” advantage that AdX enjoyed, but only after header bidding was already mainstream.

Large publishers with sizable first-party datasets end up building walled gardens of their own, giving some users ad-supported content, while offering subscriptions to others. Small and mid-sized publishers are forming login alliances and collaboratives such as The Ozone Project to fight walled gardens and reach advertisers directly with robust audience data.

For publishers, the best antidote against walled gardens is to gain a better understanding of their own audience. Bring in demand-agnostic ad tech partners into their monetization mix. And find ways to package their inventory in ways that are attractive to advertisers.